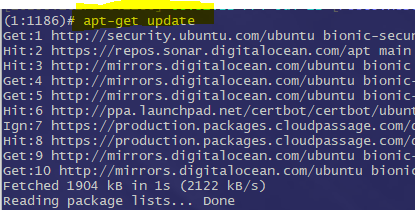 How do you upgrade only a portion of the available upgrades in Ubuntu? We were troubleshooting which update was breaking wordpress and needed to install only a few updates a time.

To upgrade the suggested release updates on Ubuntu, you normally run the following update command:

The problem with this is updating everything. Sometimes you want to see which install is causing problems. The simple way to do that is to install only some of the suggested modules and see if the problem is still present. By process of elimination and testing you can figure which module is causing a problem on your server.

This article will show you how to run only some of the upgrades that are available.

Using apt-get update (as root) will update your list of updates:

Do a Dry Run to See Suggested Updates

A dry run will show you what would of been upgraded, but doesn’t actually do the upgrade. Run the –dry-run flag as root:

Install the packages 1 by 1 Now

Now you can install them 1 by 1 and figure out which one is causing the problem.

If you have a particularly long list of packages to update you can put more than 1 together on a line and find the culprit by process of elimination, 1 section of packages at a time: